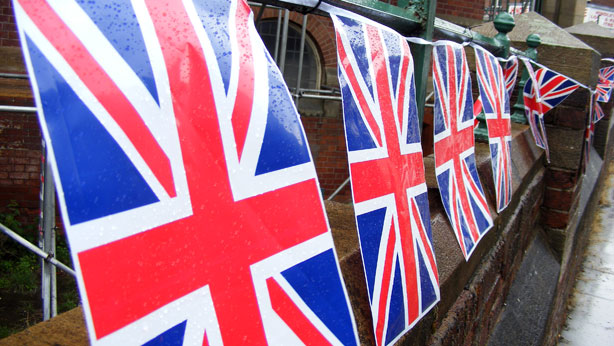 Conversations similar to the exchange briefly described above were no doubt commonplace in Hindley town centre less than an hour prior to the grand arrival of the Olympic flame.

Consensus amongst locals is that it’s all a glorified version of Wee Willie Winkie for the reality TV age, and a rather expensive one at that. But though the taxpayers of this formerly magnificent industrial town are normally vociferous in their shunning of “needless” publicity stunts, I think deep down, they’re pleased.

Beneath that tough, working class exterior, the average Hindleyite would have been secretly thrilled for the Olympic PR roadshow to be passing through their little settlement – something Athertonians, Ashtonians or Leythers cannot boast. Not even the residents of neighbouring Ince were afforded the luxury of a torch run, as instead they had to make do with a congestion-generating convoy of bus after truck after big blue abomination blasting out the greatest chart hits of 2010. Granted, the rush hour traffic of Hindley was also to endure that, but at least *we* got a bloke running with a *candle*. Take that, Makerfield!

Said situation is much like the Olympics themselves. Shortly before the host city for the 2012 Games was announced, nobody was really that bothered if London ‘won’ or not. It was only when voting came to the final round, a straight shoot-out between London and Paris, that people started to care. Now it was personal; we, the United Kingdom, had to beat the French.

Yes, it all boils down to petty rivalry. Forget the fact it would be equally as financially improbable for the average Wigan Borough resident to visit either of those cities, or the inevitable severe burden on our country’s resources, because we can’t have those Froggies beating us at anything, not least a popularity contest of this importance.

However, you can’t say the Olympics have done nothing for the town of Wigan. The boost in tourism, though small to negligible, is tangible nonetheless – not a day goes by without a perplexed tour group determinedly searching the length and breadth of the Grand Arcade for the fabled Pier. As for Hindley, the change is noticeable – road markings have been repainted, floral arrangements installed and hedges trimmed, in some cases for the first time in over a decade. Union flags adorn shop windows along the Market Street torch route, and the town centre hasn’t looked this lively since good old Uncle Joe founded Garage Pro Wrestling round the back of Hindley Tackle and Bait. (In other words, never.)

As the torch worked its way towards central Wigan, Hindley residents began to emerge from their houses and scramble, deckchairs in hand, for prime position along the relay route. Schoolchildren with vuvuzelas, men with dogs and retail proprietors with advertising boards gathered on Wigan Road, Market Street and Danes Avenue to catch a fleeting glimpse of the fabled flame that was about to pass. By 4.45, not a single vantage point remained unoccupied, with people perched precariously atop garden walls, rickety shop roofs and bridges – a smattering of brave souls even braved the roof of Cross St toilets.

The convoy arrived at the Ince-Hindley border at about 5.10pm, at which time the torchbearers gathered on their single-decker tour bus for a mission briefing. Some ventured out as far as the ‘Welcome to Hindley’ sign for a brief chat with a rowdy welcoming party of about 50 uniformed schoolkids, while others readied their cigarette lighters just in case the rain made a guest appearance. Chants of ‘light it’ were eventually answered and Todmorden Scout volunteer Emma Whitham began the first leg, from the border to the Hockery Brook. 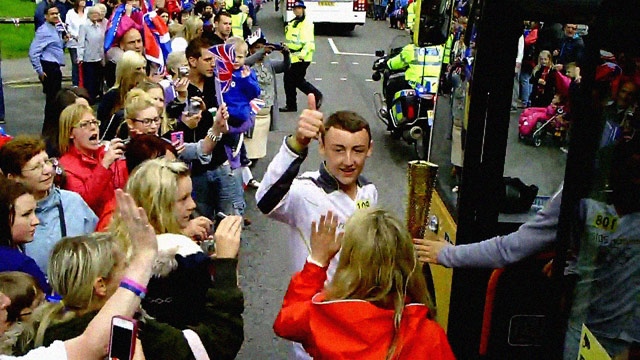 Next it was the long-awaited turn of the local hero and poster child of the Hindley Olympic relay to take up the torch. Cameron Foster was greeted with the biggest cheer of the afternoon when he received the flame just past a picturesque bench-and-flowerbed combo outside St Peter’s Vicarage. Making the most of his 300 metres, he waved and gave thumbs up to the hundreds of people armed with cameras and GB flags right up until the next changeover outside Tesco on Cross Street.

From there on, congestion made it too difficult for me to follow the Olympic bandwagon, but the torch continued on its way through the human sea on Market Street and along the scenic route past Rayner Park. After a brief stint on Castle Hill Road, the parade crossed the border out of Wigan Borough and into Bolton at about 5.33pm.

Just as soon as it had arrived, the torch was gone and the crowds began to dissipate. An underwhelmed child turned to his mother and asked, “is that it?” Well, not really – as I type, the convoy is wheeling its way through the city of Liverpool. Next it’s on to Northern Ireland, Scotland and the rest of UK before the final leg, from Hampton Court to the Olympic Stadium, on 27 July. This was just a small part of the torch’s journey, and there’s an awful long way to go yet.

So was it all worth it, and did the Olympic torch’s visit to Hindley change public opinion? Probably not; if anything, it only served to highlight the ‘pointlessness’ of it all. The more pedantic observers may simply ask, “why?” To those people, I suggest concentrating less on the actual flame which, truth be known, was never going to be an earth-shattering spectacle in itself. For the little town of Hindley to host such an event is a huge honour – for 20 brief minutes, this northern town was the centre of attention for the right reasons. And it got us all out of the house which, after all, is the mark of a good community activity, I guess.