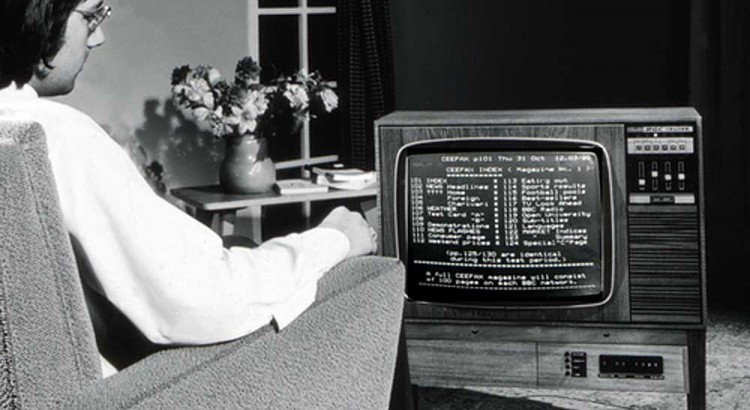 Author’s note: this article was originally published at general interest blogazine Harry Yack’s Orchestrated Muppetry on 14 December 2009. It is reproduced here with the permission of Batman. Nah, not really – I wrote it myself.

Starting today, the teletext service known as, erm, Teletext, will close forever. The process will be all but complete by tomorrow afternoon, when the services once found on ITV, Channel 4 and Five will disappear. Go on, just try and press that ‘text’ button on your remote – it won’t work. Mainly because you’ve worn it down from years of checking the cricket scores.

So will end another era in the dying digital (yes, it is digital, as in it has a lot of numbers on it) medium once revered by so many. Soon, the BBC will take a sledgehammer to all traces of teletext, rendering it completely immobile by 2012, when we’ll no doubt be accessing the latest news and views on small computers we carry around everywhere in our pockets. Oh, wait, some people already do. Please forgive me for that, I am very poor, and can only just afford to rent a landline phone connection.

So you can understand why someone like me is cheesed off right now, what with Rupert Murdoch announcing charges for the privilege of reading his ever so accurate ‘publications’ online. There has never been any such restriction on Teletext – in fact, it came free with the telly and was covered in the annual license.

This is something I discovered to my great cost when I shelled out £154.65 extra for a “brand new second hand colour television with built in telly text” from a bloke called Harry on the boot sale. Could only receive one channel. Needless to say, he wasn’t there when I returned the next week, but some other stall holder told me I’d actually bought a microwave.

Sorry if you were offended by the archaic nature of that last quip, but I’m informed the oldies are the goodies. The same is true of teletext – this interactive television service we have to make do with these days is GM Vauxhall Conference standard stuff. If analogue teletext was a Fiat Punto, then BBCi is a Peel P50, crawling along at such a pace you’d think it were travelling backwards. It simply exudes cackness, and I’ve seen calculators with a better visual interface.

A brief history of teletext

Maybe I’m being a bit harsh, as even the original teletext sucked a little bit in its formative years. It was really expensive, could only be updated once a day and usually consisted of messages such as ‘look at me I am skill I can braodcast to the naiton hahah!’ A bit like today’s text messages then.

Not that anyone cared: only about three teletext-capable TV sets were manufactured per year so only The Queen and a couple of oil barons from Abu Dhabi could see what jolly japes the specially sanctioned teletext team were getting up to in their spare time.

This soon changed, though, and by the 1980s a few teachers and solicitors could also afford to get one of these new teletext tellies. By this time, BBC were already screening news, weather and in-house profanities (see p699) to the nation – in fact, it was so successful it had its own dedicated programming slot from 4-5AM on weekday mornings. It was brilliant for security guards on night shift and insomniacs , who ensured Pages from Ceefax would win an Academy Award for Best Programme Nobody’s Ever Seen in 1984.

The early 1990s saw renewed interest in the medium with a brand new update that allowed for faster surfing and a cartoon character called Turner the Worm, which was actually yet another in-house joke at Teletext Inc. Yeah, you don’t really want to know.

It was also around this time that Bamber Boozler quit his job as a compère at the Monaco Ballroom, Hindley, to take up the position of quizmaster at Teletext. He quickly became an unlikely face of the medium, appearing in numerous magazines and on Countdown three times, where he was an ‘absolute demon at the numbers game’ according to Richard Whiteley.

It is unknown whether Boozler will find further work after the demise of teletext, though there has been speculation he could front Gilette Soccer Special on Sky Sports News, announcing the latest football scores and grinning inanely at Phil Thompson, who’ll probably smash his face in. I’ll believe it when I see it, though.

As of today, the campaign to bring back teletext goes into full force as a bunch of heavies roll into the offices of Teletext Inc. to guard the big red ‘switchoff’ button. Sadly, though, they can’t stay awake forever and it’s inevitable said button will get pressed at some point. Until then, enjoy what’s still with us while you can, and don’t let it all spoil your Christmas.