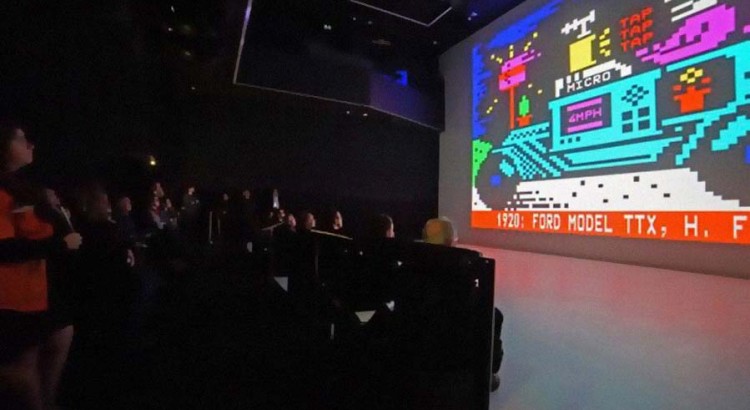 In previous years, I have posted detailed walkthroughs of my entries for the last two editions of the International Teletext Art Festival. They didn’t necessarily need to be explored in such detail, but because of semi-obscure references to things like little-known island Rockall and the largely forgotten Good Times virus, I felt the need to elaborate, to open that door to my brain’s complicated inner workings. And as we all know, things like this suffer a significant loss of impact once they’re explained.

For the 2014 festival, I vowed to put together an entry so comprehensive that I wouldn’t need to write one of these blog posts. This series of teletext pages would be self-explanatory, standing alone as five .TTX files (or, in the case of the internet, .GIF images) to be posted without a potentially pretentious ten-point FAQ.

Of course, the very fact I am writing this post suggests my attempt was a failure, at least in part. Look, I am just going to paste the pages here for you to look at, so there is one more archive of these pictures available on the web. Because teletext is prone to glitching in areas with poor reception, these may not have come through very clearly on your standard definition analogue telemovision. Heck, in many countries you just get a disappointing ‘Loading Page’ message… what is this, a Sony Playstation game?

D’oh, OK then. I’ll talk for a bit longer, but stop me if I start explaining the art again.

My perfect entry would have contained absolutely no text, since whatever language you use, you’re going to exclude certain viewers (readers?). But this is teleTEXT, and it isn’t quite the same without simultaneous use of both the graphic and text modes. Theoretically, you could make up a nonsense language to include *and* exclude everybody at the same time… but you run the risk of over-complication. Teletext, by its nature, is all about simplicity.

Side note: Charles Babbage is widely credited with creating the first computer. And teletext, it would seem. Uh oh, that was far too explanatory, best get back to the images!

Incidentally, I originally started working on a completely different series over a year ago and scrapped it just two months before the festival itself. You will never see those pages as they are so horrifically pretentious that you may want to trash your nearest art gallery, and I don’t want to be held responsible for such things, especially not after that incident with Fred’s weather map. (It doesn’t look anything like the real map of the UK, which is much more blocky and pixellated!)

Ah go on then, you might see them in the outtakes section of the accompanying DVD box set, to be released in June 2017. Pre-order now and get a free teletext cheque book and pen.

And that’s pretty much it, so you can all go and view these pages on SwissText, ARD Text, ORF Text and ARTE Text until 14 September 2014. If you have access to those services, of course. If not, please don’t visit ITAF’s In The House Blog otherwise you’ll be pining for the days of analogue teletext until well after the medium’s 100th anniversary. Only joking, I highly recommend visiting said Tumblr site, and even submitting your own pictures if you have the correct facilities. I only wish I could…